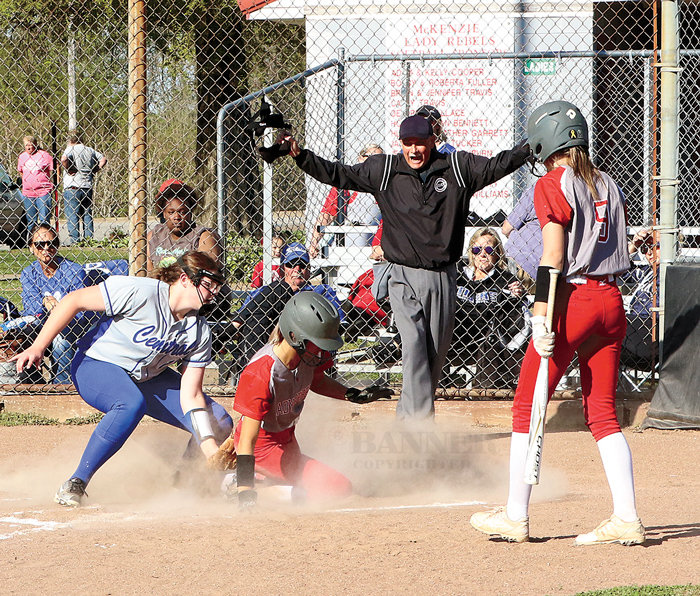 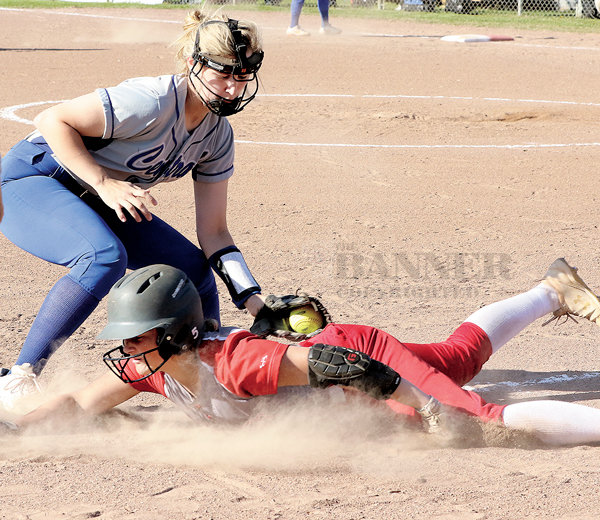 Lady Rebel Katie Chesser is safe after beating a tag by Bruceton third baseman Carlee Hicks. Hicks was injured late in the game and was transported by ambulance from the field. Her coach said she is doing well.
Photo by Joel Washburn/The Banner
Previous Next
Posted Tuesday, April 27, 2021 11:41 am

McKENZIE (April 19) — McKenzie Lady Rebels took the 9-3 win over Hollow Rock-Bruceton Central Lady Tigers on April 19 at McKenzie Park.
McKenzie took an early lead and never looked back, scoring two runs in the first inning, five in the fifth, and two in the sixth for a total of nine points. Central scored one in the fifth and two in the seventh inning for a total of three points.


For the Lady Rebels, Kassidy Brown picked up two RBIs in the first innings bringing in Katie Chesser and Anna Robinson. The five RBIs in the fifth inning came from Jaden Barton, Nicole Gibson, Kristen Bradberry and Savannah Davis. Payton Ognibene’s single in the sixth picked up the McKenzie’s eighth and ninth run bringing home Brown and Belle O’Brien.
The Lady Rebels had 16 hits in the game. Ognibene pitched a complete game giving up six hits and three runs with ten strike outs.
For Central, Addison Hampton allowed 16 hits giving up nine runs with five strike outs. Nevaeh Davis was 2-3 in the box picking up two RBIs with Mykenzie Burton picking up the other RBI. Other Central batters making it on base were Keely Williams, Carlee Hicks and Hampton.