MEMPHIS (November 25) — McKenzie Rebels fans had Thanksgiving twice following the Friday, November 25 victory over Memphis Academy of Science and Engineering. The semi-final championship round was not much of a contest for the Rebels, 14-0, as they claimed a 34-0 victory over the Memphis team. 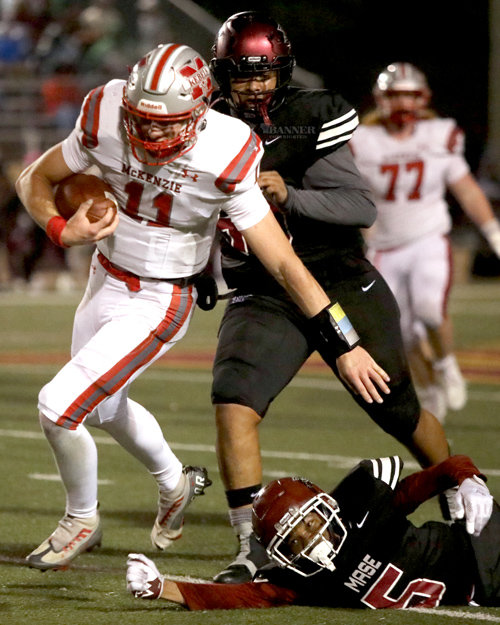 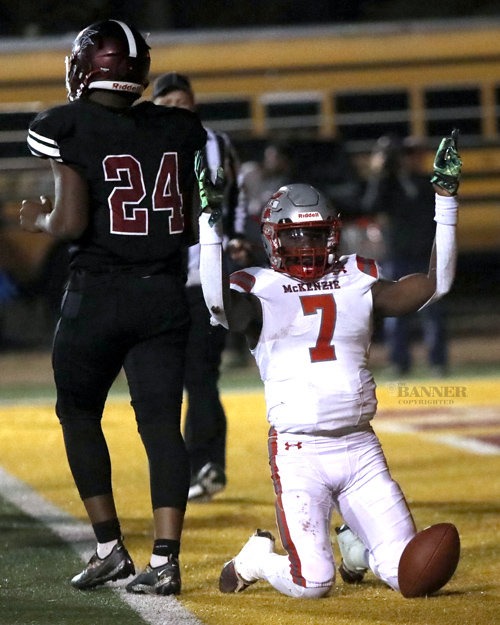 Marquez Taylor scores a touchdown for the Rebels.
Photo by Tammy Graves 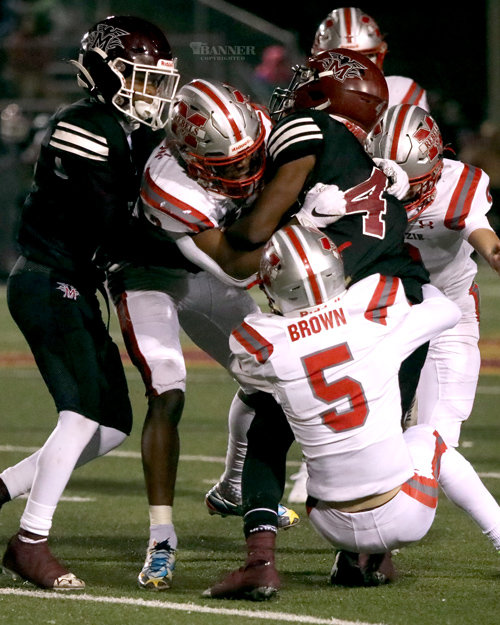 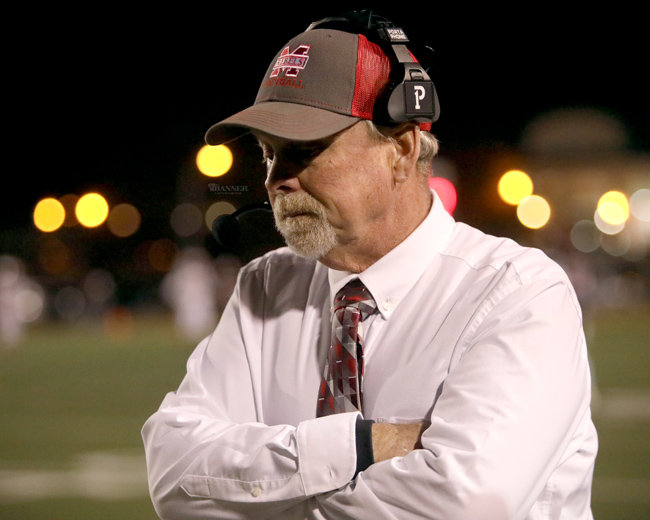 Coach Wade Comer on the sideline. He led his team to the championship round.
Photo by Tammy Graves
Previous Next
Posted Tuesday, November 29, 2022 2:16 pm
By Joel Washburn
washburn@mckenziebanner.com
MEMPHIS (November 25) — McKenzie Rebels fans had Thanksgiving twice following the Friday, November 25 victory over Memphis Academy of Science and Engineering. The semi-final championship round was not much of a contest for the Rebels, 14-0, as they claimed a 34-0 victory over the Memphis team.
With the victory, McKenzie earned a return trip to the Class 1A championship game in Chattanooga scheduled for Friday, December 2, 2 p.m. CST at Finley Stadium against Clay County, 13-1.
McKenzie controlled the whole game and gave younger players valuable field time in the fourth quarter.
Marquez Taylor scored first at the 7:29 mark in the first quarter. Zach Aird added the PAT for a 7-0 lead.
Quarterback Jackson Cassidy scored on a 11-yard run at the 3:50 mark. It was followed by a failed two-point conversion.
Taylor scored again at the 2:26 mark and Aird added the PAT to make the score 20-0 in the first quarter.
Cassidy again scored on a 44-yard run in the second quarter and Aird added the PAT for a score of 27-0.
Taylor added the final touchdown on a four-yard run in the third quarter. Aird added the PAT for a 34-0 score, which was the final score of the game.
Jackson Cassidy had 51 passing yards, 80 rushing yards, and two rushing touchdowns. Cassidy was five of eight on passing with the longest being 22 yards.
MASE’s Demetrious Visor had 9 passing yards on four completions of 18 attempts.
Marquez Taylor had 32 receiving yards for the Rebels.
Kumaro Brown had 70 rushing yards to lead the MASE team.
MHS rushing included: Taylor, 11 carries for 59 yards and two TDs; Rashad McCreary, four carries for 54 yards; Etijay Tharpe, one carry for 9 yards; Brady Brewer 3 carries for -2 yards.
MASE rushing included: Kumaro Brown, 13 carries for 70 yards. The remainder of the team had 30 yards.
MHS receiving included: Taylor, three for 32 yards; Aird, two for 19.
MASE receiving included K. Brown, 1 for -2 yards; the remainder of the team had three receptions for 11 yards.
MHS tackles included: Jackson Cassidy, 7 and 2 assists; Tate Surber, 3 and 1 assist; Landon Brown, 3; Colt Norden, 2; Brady Brewer, 1; Drew Chappell, 1; Camden Allison, 1; Jake Cassidy, 1; David Cheney, 1; Stafford Roditis, 1; remainder of team, 5;
MASE had a total of six tackles.
MHS had two interceptions; Jackson Cassidy had 1 and Rashad McCreary had 1.
Kickoffs for MHS were five for S. Roditis for 251 yards; Z. Aird, 1 for 45 yards.
MHS had 3 punts by Roditis with an average of 33 yards.