Mustangs Fall to Riverside in Semifinals

HUNTINGDON — The Friday after Thanksgiving is normally the big Christmas shopping kickoff known as Black Friday, but if you are a high school football fan, it means state semifinals in your classification and a spot in the state championship on the line.

Mustangs Fall to Riverside in Semifinals 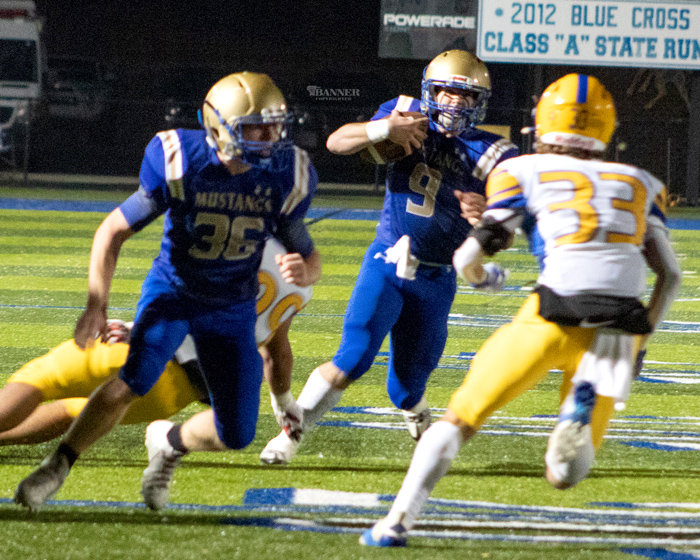 Gray Eubanks (9) gets behind CJ Pelonero (36) for yards.
Photo by Jessa Potts 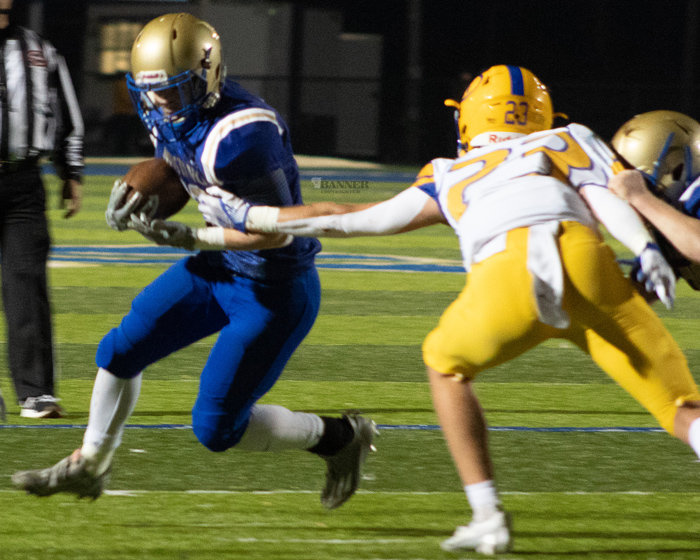 Ashton Hutcherson (12) avoids a Riverside defender.
Photo by Jessa Potts
Previous Next
Posted Tuesday, November 29, 2022 2:11 pm
By Jim Potts
jpotts@mckenziebanner.com
HUNTINGDON — The Friday after Thanksgiving is normally the big Christmas shopping kickoff known as Black Friday, but if you are a high school football fan, it means state semifinals in your classification and a spot in the state championship on the line.
Carroll County was fortunate enough to have not one, but two teams playing in the state semifinals in Class A and AA. McKenzie traveled to Memphis Academy of Sciences and Engineering (MASE) while Huntingdon hosted Parsons Riverside for the second time this season. The first meeting was a lopsided 33-7 contest near mid-season, but this time a state championship berth was on the line. The Mustangs won a state championship in 2003, but it was Riverside’s first time getting this far.
For the first time in several games, Huntingdon did not win the toss. So Riverside elected to receive and go on offense first. The Panthers ran the kickoff back to the 50-yard line and started a slow methodical drive that went nine plays resulting in a 9-yard touchdown with the extra point good for a 7-0 Riverside lead with 7:34 left in the opening quarter. Huntingdon went three plays and punted on their first possession using very little time. The Panthers drained the rest of the first quarter clock on their second possession and scored on a 12-yard touchdown pass on the first play of the second quarter. The PAT was good for a 14-0 lead.
The Mustangs got good field position with a good kickoff return to their own 45 and drove inside Panther 20 yard line before their drive stalled with incomplete passes on third and fourth down. Both teams swapped possessions for the remainder of the second quarter and went into halftime with the Panthers leading 14-0.
The second half started the same way the first half ended with Huntingdon going three plays and out and Riverside going three plays and out. The craziest play of the game occurred on fourth down with Parsons having to punt. Huntingdon returned it deep in Riverside territory when a fumble occurred and Huntingdon’s Aden Hilliard scooped it up and put the Mustangs on the scoreboard with a touchdown. The extra point was good with 7:46 left in the third quarter with the lead cut in half 14-7 in favor of the Panthers.
Two possessions later, Riverside scored on a 12-yard touchdown with less than a minute remaining in the third quarter. The PAT was no good, but extended the score to 20-7. The Mustangs had possession when the quarter ended and the fourth quarter began. They reached the Panther 18 yard line, where Brady Warbritton took it around the left side and scored with 7:50 left in the final quarter. The PAT was no good with the Mustangs cutting the lead to 20-13.
After swapping possessions, Riverside put the game away with a three-yard touchdown with 1:33 left in the game. The PAT was no good with Riverside leading 26-13 which was the final score.
The Mustangs ended 2022 with an impressive 11-3 record. They posted wins against Riverside, 2 wins against Union City, defeated Milan and Jackson Southside, and Trenton among others. At the beginning of the season, no one was sure what kind of team Huntingdon would be. They found out pretty quick going on a six-game win streak before falling to Westview in a region matchup.
Next season Huntingdon will have a rebuilt schedule featuring seven region games and three non-region games. The region schedules were released by the TSSAA (see related article). The full schedule for 2023 should be available soon.