A Glimpse into the 1961 Archives

This week, I wanted to look at the 1961 Banner archives just to see what was going on in our town compared to the excitement taking place on a global scale.

A Glimpse into the 1961 Archives 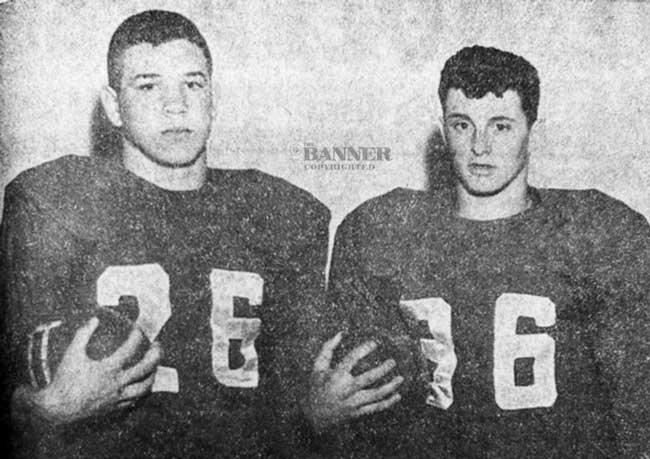 Mike Ferringo and Tommy Herron were selected as captains of the McKenzie High School Football Team. 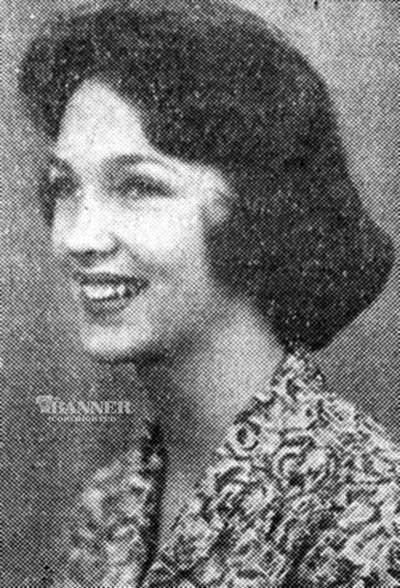 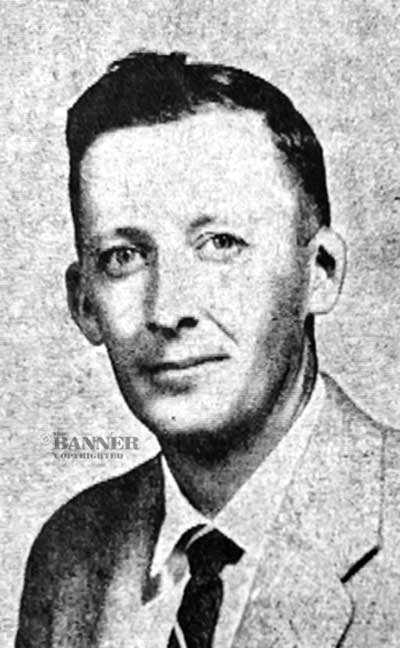 Ed Brashear was elected president of the McKenzie Jaycees. 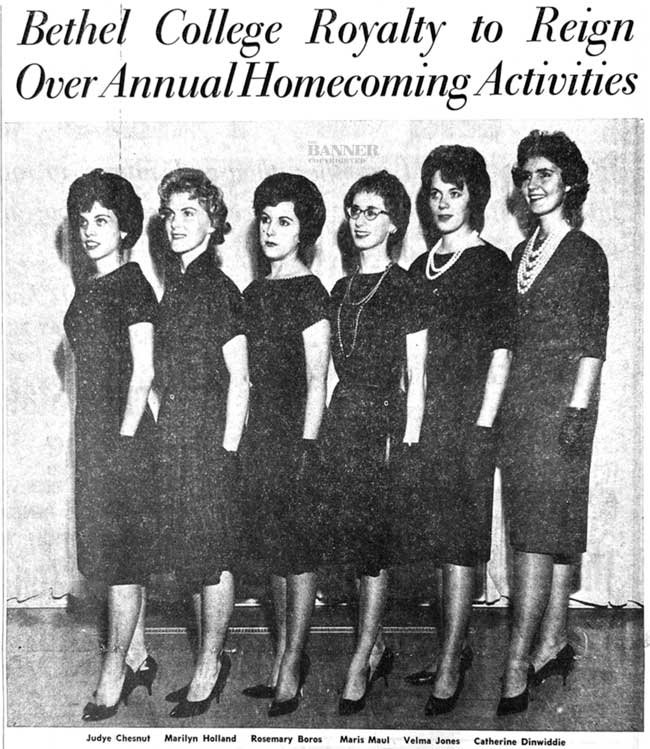 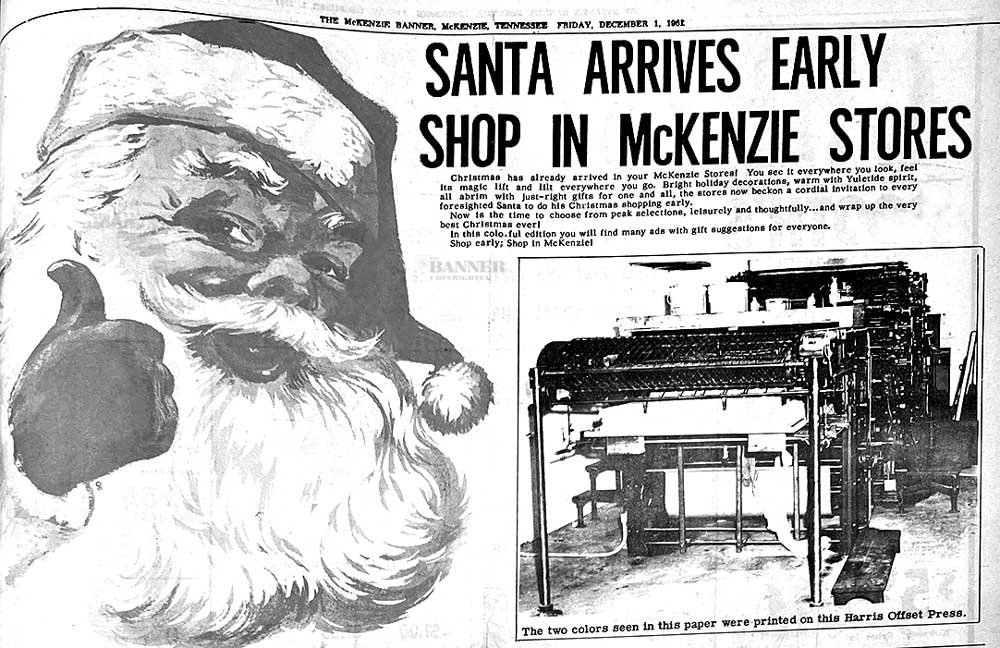 The McKenzie Banner got a new two color press just in time for Christmas. 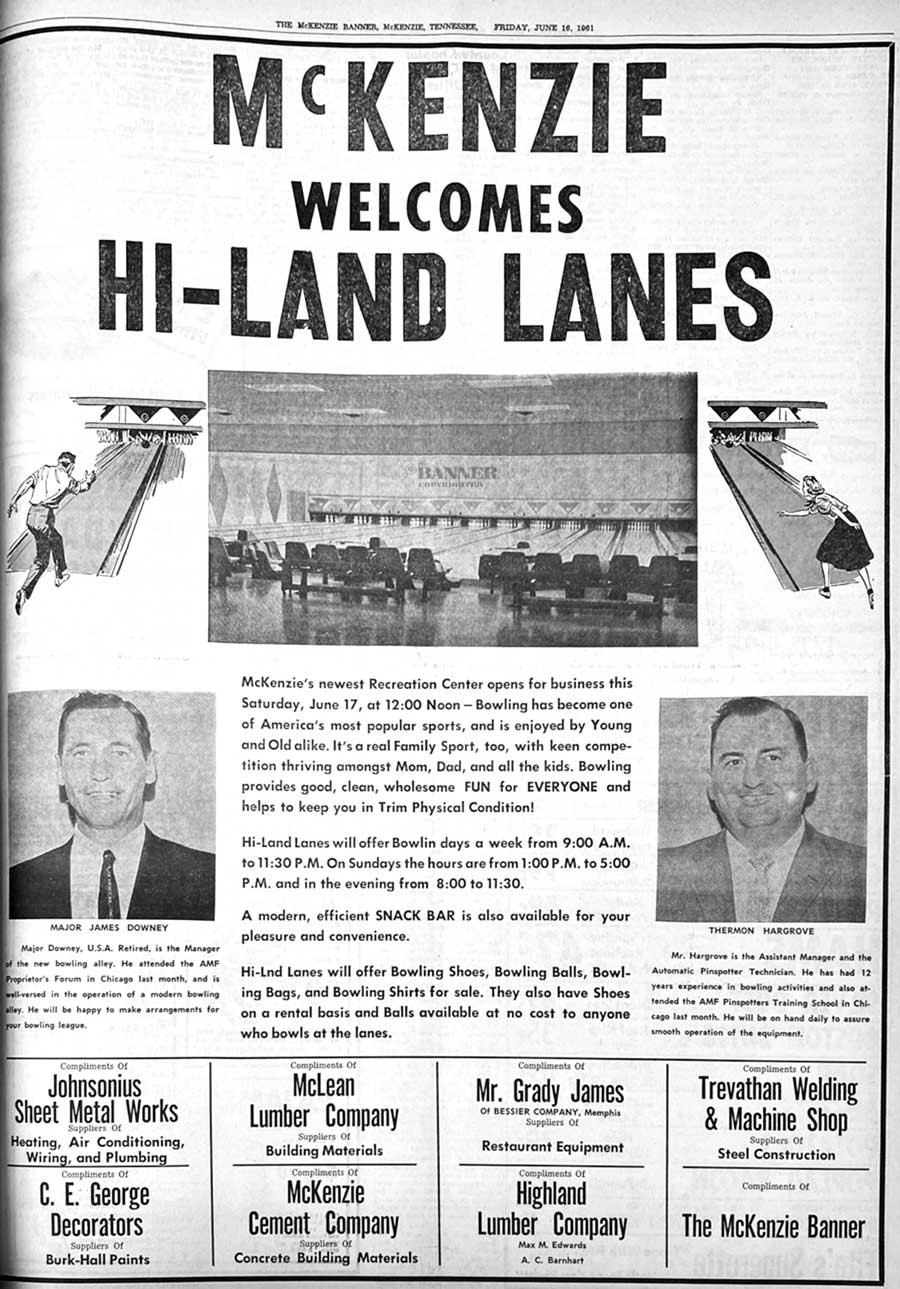 McKenzie’s bowling alley opens.
Previous Next
Posted Tuesday, August 9, 2022 11:32 am
By Jason Martin
jmartin@mckenziebanner.com
This week, I wanted to look at the 1961 Banner archives just to see what was going on in our town compared to the excitement taking place on a global scale.
In McKenzie, it seemed business as usual. Former mayor Dr. Gallimore was laid to rest; McKenzie High School named Judy Burroughs and Don Jackson valedictorian and salutatorian; Ted Coleman was selling insurance through State Farm; and Bob Prosser was named student body president at Bethel College.
In the United States: John F. Kennedy is sworn in as the 35th President of the United States; a B-52 Stratofortress, with two nuclear bombs, crashes near Goldsboro, North Carolina; President John F. Kennedy establishes the Peace Corps; “Barbie” gets a boyfriend, when the “Ken” doll is introduced; the U.S. launches the failed the Bay of Pigs invasion of Cuba; U.S. Freedom Riders begin interstate bus rides; baseball legend Ty Cobb dies at the age of 74; Roger Maris of the New York Yankees hits his 61st home run in the last game of the season; Ernest Hemingway dies of a self-inflicted gunshot wound; and American involvement in the Vietnam War officially begins, as the first American helicopters arrive in Saigon, along with 400 U.S. personnel.
Elsewhere in the world: The trial of Nazi Adolf Eichmann begins in Jerusalem; Soviet cosmonaut Yuri Gagarin becomes the first human in space; Soviet submarine K-19 suffers a reactor leak in the North Atlantic; construction of the Berlin Wall begins; Iraqi president Abd al-Karim Qasim announces his intention to annex newly independent Kuwait; Stalingrad is renamed Volgograd; Cuban leader Fidel Castro announces he is a Marxist–Leninist, and that Cuba will adopt socialism;
In the world of Arts and Entertainment the big movies were: West Side Story; The Hustler; and Judgment at Nuremberg. The top songs were: Moon River; Where the Boys Are; Will You Love Me Tomorrow; Blue Moon; and the Lion Sleeps Tonight. In television the top shows were: Rocky and Bullwinkle; Walt Disney’s Wonderful World of Color; Hazel; Dick Van Dyke Show; and Top Cat. In literature the top books were: Stranger in a Strange Land, Robert Heinlein; Catch-22, Joseph Heller; The Carpetbaggers, Harold Robbins; The Making of the President: 1960, Theodore White; The Agony and the Ecstasy, Irving Stone; The Winter of Our Discontent, John Steinbeck; and Henry Miller’s 1934 novel Tropic of Cancer published legally in the U.S. for the first time.
And in everyday life: the electric toothbrushes are introduced; “Frito” corn chips appear and the average cost of a new car was $2,850.