Cassidy is a Mr. Football Finalist

Winners to be announced December 7

NASHVILLE (November 22) — The Tennessee Titans Mr. Football Awards will be presented to the top football players in nine classifications of the Tennessee Secondary School Athletic Association on Wednesday, December 7, 2022, at Nissan Stadium in Nashville.

Cassidy is a Mr. Football Finalist

Winners to be announced December 7 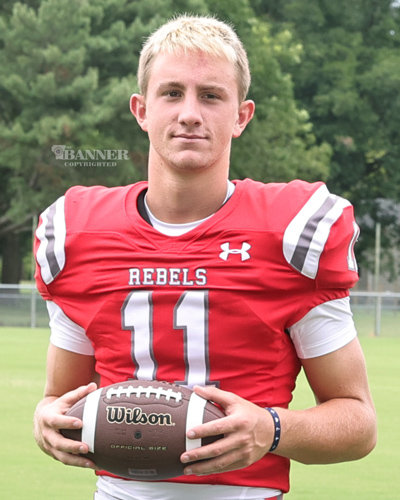 Jackson Cassidy
Posted Tuesday, November 29, 2022 5:00 pm
NASHVILLE (November 22) — The Tennessee Titans Mr. Football Awards will be presented to the top football players in nine classifications of the Tennessee Secondary School Athletic Association on Wednesday, December 7, 2022, at Nissan Stadium in Nashville. The top kicker in the state will be recognized with a Mr. Football Award, regardless of classification. The three finalists in each category were announced by Mike Keith and Titans head coach Mike Vrabel in a live video stream.
Five semifinalists in each classification were announced on November 3. There are six classifications in Division I and three in Division II. The top kicker in the state will be recognized with a Mr. Football Award, regardless of classification.
A committee of statewide sports writers selected winners based on performance in the 2022 regular season. Academics and character were also taken into consideration. High school head coaches and members of the media nominated the finalists.
For the second year in a row, a McKenzie Rebel has been nominated for Class A’s Mr. Football Award.  Last year, it was junior running back Marquez Taylor and this year it is senior quarterback Jackson Cassidy, son of George and Angela Cassidy.
Over the course of four seasons, Cassidy has racked up impressive numbers. Most of those numbers came in the 10, 11, and 12th grades.
In 47 games which counts through the final regular season game at McEwen, Jackson completed 238 passes out of 436 attempts for 4,472 yards and 50 touchdowns with 15 interceptions.  His career completion rate is 55 percent of his passes.  He has done plenty of damage with his feet also rushing 196 times for 1736 for an average of 8.9 yards per carry and 28 touchdowns.
This year, heading into the playoffs, Cassidy completed 66 of 107 passes for 1464 yards and 20 touchdowns with only 2 interceptions.  On the ground, he has 28 carries for 347 yards and 7 touchdowns.
He has been a force defensively with career numbers including 221 total tackles, 14 tackles for loss, 7 interceptions, 3 caused fumbles, and 1 fumble recovery.  This year alone, Cassidy has 51 total tackles and 2 tackles for loss through the ten regular season games.
“We are very appreciative of the Tennessee Titans for their continued support of these awards,” stated Mark Reeves, Executive Director of the TSSAA. “Having the awards presented at Nissan Stadium will provide a very special atmosphere for these outstanding student-athletes.”
This is the 38th year that the Mr. Football Awards have been presented to Tennessee’s best high school football players. A Mr. Football trophy will be presented to the winners of each category. A Mr. Football plaque will be presented to the other two finalists in each category. The other semi-finalists will each receive a certificate.
Mike Keith, play-by-play voice of the Tennessee Titans, will emcee the awards presentation. A live videostream of the awards will be provided on the Tennessee Titans website.
2022 Tennessee Titans Mr. Football Finalists
DIVISION I, CLASS 1A
Kumaro Brown, Memphis Academy of Science & Engineering, Jackson Cassidy, McKenzie High School, Isaiah Thomison, Fayetteville High School.
DIVISION I, CLASS 2A
Jacquan Davis, Fairley High School, Josh Jackson, Tyner Academy, Zech Prince, East Robertson High School.
DIVISION I, CLASS 3A
Jordan Harris, Alcoa High School, Mark Joseph, Sheffield High School, Lance Williams, Alcoa High School.
DIVISION I, CLASS 4A
Gabe Borders, Macon County High School, Marcellus Jackson, Fulton High School, Walker Martinez, Anderson County High School.
DIVISION I, CLASS 5A
De’Sean Bishop, Karns High School, Malaki Dowell, White County High School, Brayden Latham, West High School.
DIVISION I, CLASS 6A
Justin Brown, Blackman High School, Arion Carter, Smyrna High School, Noah Vaughn, Maryville High School.
DIVISION II, CLASS A
Jared Curtis, Nashville Christian School, Kevin Finch, University School of Jackson, D.J. Merriweather, Clarksville Academy.
DIVISION II, CLASS AA
Kaleb Beasley, Lipscomb Academy, Charlie Robinson, Webb School of Knoxville, Maureice “Junior” Sherrill, Lipscomb Academy.
DIVISION II, CLASS AAA
Max Carroll, Briarcrest Christian School, Caleb Hampton, Baylor School, Marcel Reed, Montgomery Bell Academy.
KICKER OF THE YEAR
Max Gilbert, Lausanne Collegiate School, Oziel Hernandez, Germantown High School, Reese Keeney, Farragut High School.