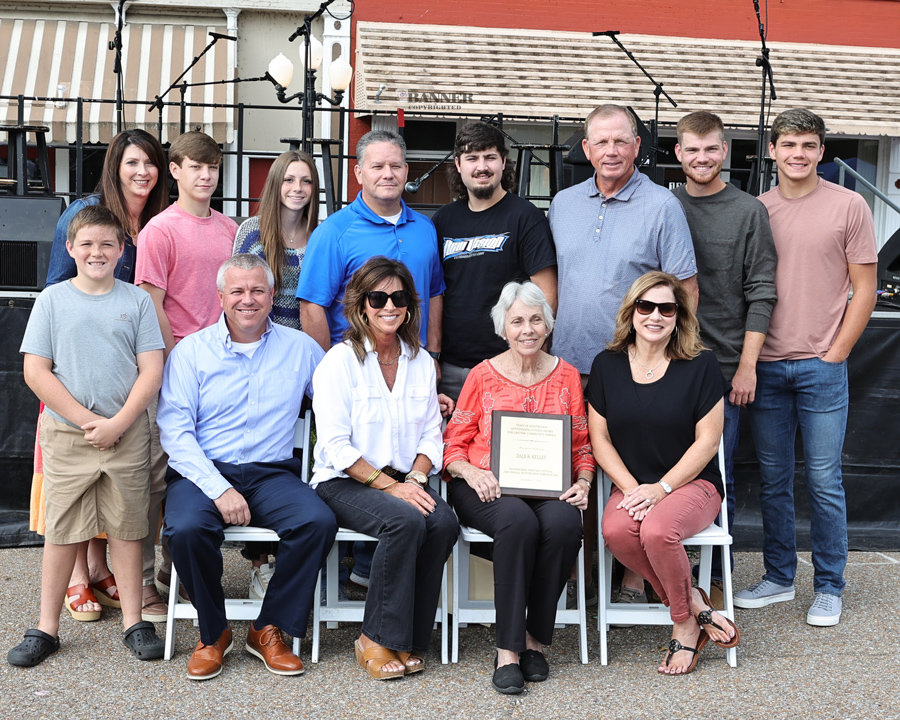 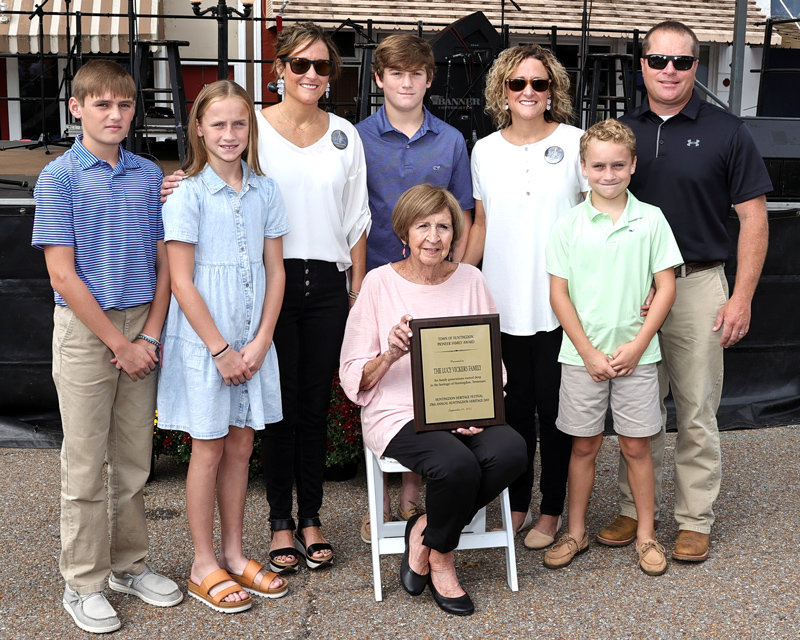 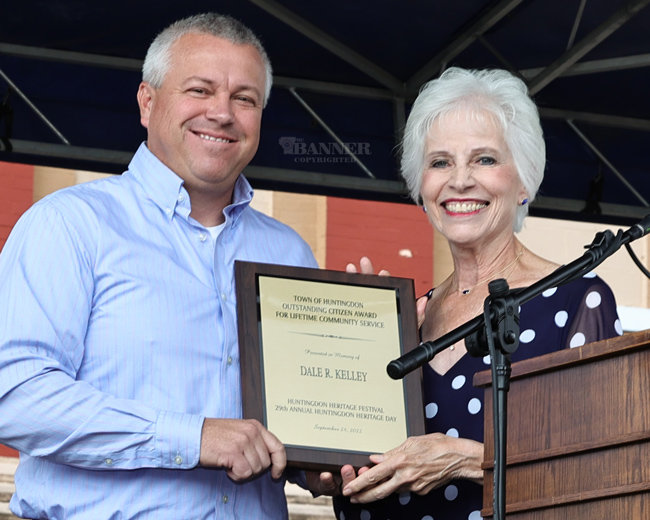 Cliff Kelley accepts the Citizen of the Year plaque from Mayor Nina Smothers on behalf of the Kelley family. 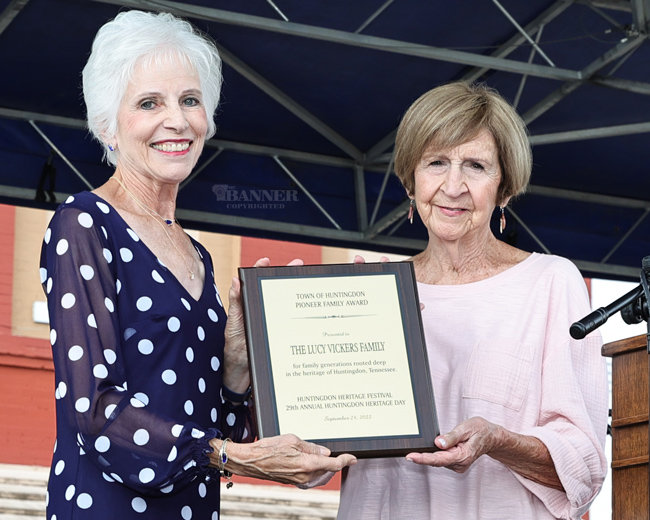 The tall lady, Joy Jenkins, with LaTonya Carter. Joy was walking about downtown during the festival.
Previous Next
Posted Tuesday, September 27, 2022 5:00 pm
By Joel Washburn
washburn@mckenziebanner.com
HUNTINGDON (September 24) — Dale R. Kelley was honored as the Outstanding Citizen of the Year and Lucy Vickers was honored as the Pioneer Family recipient during the 29th annual Huntingdon Heritage Festival on Saturday, September 24.
The event featured music entertainment, a classic car show, food vendors, arts and crafts, and story-telling and concluded with the Huntingdon High School Alumni Association’s Mega Reunion.
Mayor Nina Smothers opened the festival from the grand stage set up on the Court Square as part of the bicentennial celebration of the town and the county.
Vice-Mayor Smothers ascended to the office of mayor upon the untimely death of Dale Kelley, who served 30 years as the town mayor. The town honored the service of their late mayor by designating the Outstanding Citizen Award to Kelley. Just as Kelley had done for the previous 28 years, Smothers announced the winners of the two annual awards - Outstanding Citizen and Pioneer Family.
Kelley was a 1957 graduate of Huntingdon High School, a U.S. Air Force veteran, a graduate of Bethel University, a high school basketball official, a college basketball official, and officiated three NCAA Final 4 games. He was elected the Carroll County Property Assessor, county commissioner, state representative, commissioner of both the Department of Labor and Transportation, special advisor for Governor Bill Haslam, athletic director at Bethel University, member of the county Sports Hall of Fame, state Sports Hall of Fame. He was coordinator of offices for the Big 12 Conference, Southland Conference and Ohio Valley Conference. He was the owner of K&K Real Estate and he sponsored the legislation that created the Carroll County 1000-Acre Recreational Lake. He served as secretary of the Carroll County Watershed Authority until his death.
Kelley and Carlene were married for 57 years. They had three children - Amanda (Rick) Wallace, Meredith (Tommy) Surber, and Cliff (Holly) Kelley, and eight grandchildren, Paten Plunk, Jack Surber, Cole Edwards, Eli Surber, Ty Kelley, Tate Surber, Quinn Kelley and Max Kelley.
Cliff Kelley accepted the award on behalf of the family. Cliff said public service was an honor for his dad, who enjoyed the teamwork of the people of Huntingdon. He thanked the people for the support of Dale. Cliff Kelley said the future of Huntingdon is bright.
Pioneer Family Award - Lucy Barksdale Vickers was honored with the Pioneer Award. She is the daughter of T.J. and Mildred Barksdale. The family moved to Huntingdon in 1940s from Lavinia. Her dad was a partner in the cotton gin with Sam Barger. Mildred obtained her teaching degree from Bethel College and taught school in a one-room school in the area before moving to Huntingdon Primary School. Lucy graduated Huntingdon High School and then Lambuth College, where she graduated in 1969. She and her mom both taught at HPS for three years. The family has three generations of teachers with her eldest daughter, Jill in education in Connecticut and later New York state. Twins Jana and Joy both are teachers. Jana is now the assistant principal at Huntingdon Primary and Joy is a teacher at the same school.

Forum on Blue Oval is in Paris Wednesday